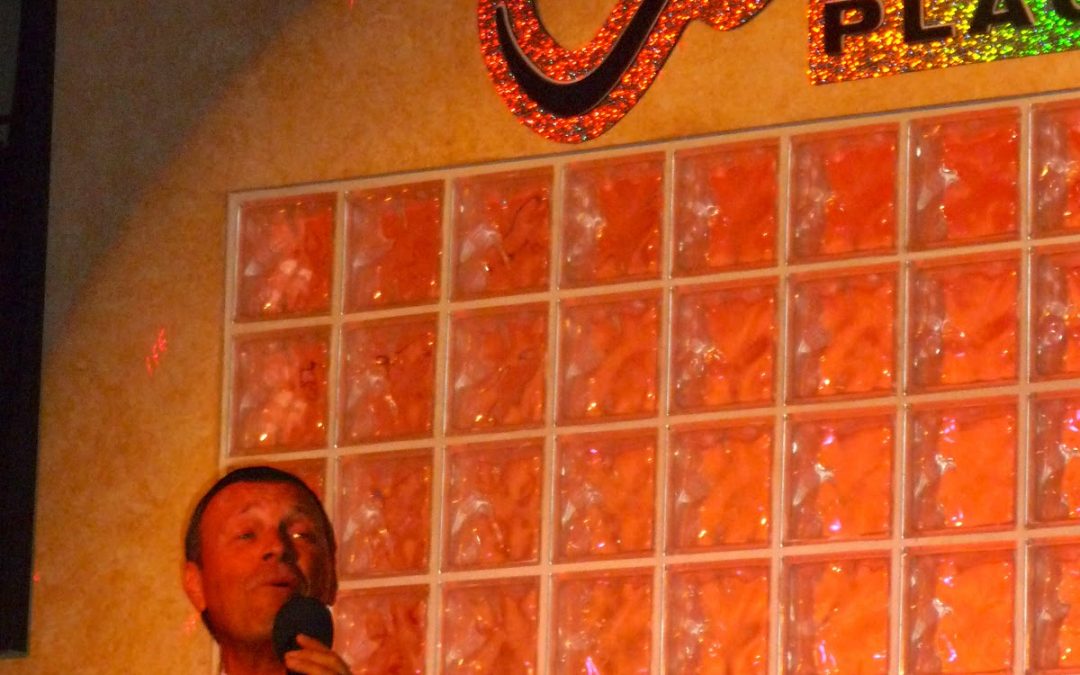 I was introduced to Frank DiSalvo through Marco Najera (photographer for the Celebrity Jazz Jam) and decided to interview him. I must admit I’ve never seen his show although I’ve heard a lot about it. He’s such an upbeat and personable guy it’s refreshing.

He has his own show at ‘Franks Place’ named after none other than Frank himself at the Indian Wells Resort. How he got there is quite remarkable and I’d like to share that with you.

Frank picked up the guitar the summer he turned 16 and “went nuts” as he put it. He learned to play by practicing every day and by the end of the summer he had his first 5 piece band and never looked back.

He’s now been at it 50 years. He plays all kinds of music and has had big bands, small bands and solo shows.

He was in Redding, Ca. in 2007 with a 7 piece swing band when the economy crashed and like most musicians found the work had dried up. He had always wanted to move to the desert with its hub of entertainment and after 3 years decided it was time to take the plunge. So in 2010, he rented a condo in La Quinta for 6 months and moved to the desert determined to “find a gig.” He went out every night and asked to sing a song at the places he went and on the 5th night Tony Carmen told him that the Indian Wells Resort was looking for someone that did Sinatra standards and off he went.

He was directed to Dave Nichols, so he dropped him off a promo pack. Dave called him the next day and was so excited to hear fromhim he asked, “how soon can you get here?” He was there by 11 am. The meeting went very well and he was offered a 3 year contract on the spot. It was for Wednesday and Thursday nights as they had someone on the weekends.

He decided to counter with a 2 year to keep his options open. He was asked to come down to sing for a group of hotel guests the next evening. Frank brought the 6 couples he knew to add to the crowd, about 40 in total. Those few songs turned into 2 & 1/2 hours and no one would let him quit. At the end there was $400 in the tip jar and it was just the beginning. He was offered a 5 year contract with “whatever he wanted.”

The room was called ‘Jakes’ and Frank suggested they change it to ‘Desi’s’ since it was originally owned by Desi Arnaz and Lucille Ball. They came back and said “we want to call it ‘Frank’s Place’ after you.” He was of course delighted.

He was packing them in every night and blowing the doors off when Dave called him in and offered him Friday night. Frank asked about their other contracted musician, he was told they would continue to pay him as well, wow! At the time there was nothing on the walls so Frank suggested they add some black and white pictures of the icons of the era including Frank Sinatra. Frank had a Bachelor’s degree in art sothey let him design the photos, and that project grew into a complete re-do of the room itself including moving the stage and redecorating the room. So it truly is ‘Frank’s Place’.

Frank performs every Thursday and Friday with a one man show, Saturdays with a trio and Sundays with a 16 piece Ted Herman Band. It’s 6-9 for ‘dinner shows’ Thursday through Saturday and 6-8 on Sundays. Every night is different and he packs the room every single night he performs. There is a $15 coverThursday through Sunday. His first set includes jazz standards from Dean Martin, Sinatra, Sammy Davis Jr. and voice impressions. The second set includes specialty songs and full voice songs. He adds some Beatles, BB King blues, country and many songs from the 40’s, 50’s, and 60’s with audience sing alongsincluding Italian songs, “American Pie” and “Sweet Caroline.” He adds 15 minutes of stand-up comedy and then a tribute to our military including patriotic songs. His finale includes “Hallelujah” and “Turn on Your Heartlight,” with candles from the audience.

Frank has 7 CDs to date and can be found on his site, www.frankdisalvo.com. He performs everything from the standards to BB Kings blues. He tells jokes, involves the audience in trivia and connects with his audience. Frank also has been featured artist with the Coachella Valley Symphony and this year he will be performing for the Fitz Christmas show at the Mc Callum Theatre.

Frank has truly found a home in the desert and continues to be an inspiration. One of the things I love the most about our interview is when he talked about how many musicians are employed because of his show (26) and how many staff have been hired to work his shows including 5 bonafide chefs and 15 to 20 servers, bartenders, and Maitre D’s. Now that’s success! The new season starts in October so don’t miss a chance to have a sell-out entertainment experience at ‘Frank’s Place’ at the Indian Wells Resort 76-661 Highway 111 Indian Wells, Ca.