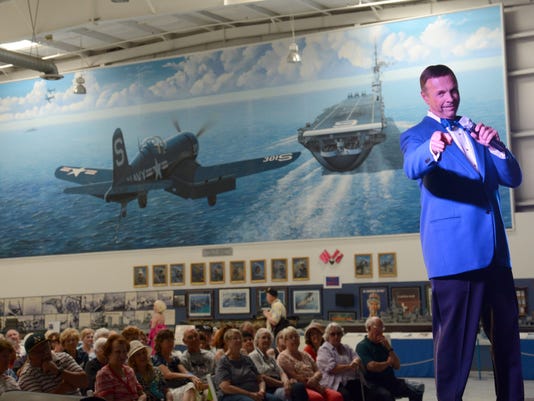 For the last 50 years I have played and sang with a band, and I will continue with my music as long as it’s humanly possible.”

Frank DiSalvo didn’t have a chance to go anywhere but into a musical career; it was in his DNA. “My mother was instrumental in my love of music. She was a ‘Bobby Soxer,’ a real music fanatic,” he said.

When he was a small boy, DiSalvo’s mother played nonstop records of all the great crooners of the era “My mother bought me my own record player when I was 2 years old,” he recalled. “She said I would sit in front of it for hours and sing along.”

DiSalvo soon was singing songs like “Mockingbird Hill,” “How Much is that Doggie in the Window?” and duets with her.

Born in San Jose, he was raised in Santa Cruz, which in the ’50s was just a fishing and retirement town. Visitors came in the summer to enjoy the sea, the boardwalk and wharf, DiSalvo said.

“My maternal grandfather, Sam Caladrino, was a Sicilian fisherman. As a youngster I spent every other weekend with him on his boat. Besides grandpa’s love of fishing, my father was an avid fisherman as well. If not on the boat with grandpa, I was either on the lakes, streams or rivers with my dad.

“My paternal grandfather, Sal DiSalvo, was a woodworker, and I spent the other weekends with him while growing up. When I was about 7 years old, he said it was time I made something and began to teach me how to use the woodworking tools, which later in my life came in very handy when I made my own guitars.”

DiSalvo’s love of music brought him to study the ukulele and the accordion at an early age, but at age 15 when he saw The Beatles on “The Ed Sullivan Show,” he said he was instantly drawn to the guitar. As luck would have it, a friend of his father, a guitar teacher, owed him some money, and they traded guitar lessons to cover the debt.

After seven or eight lessons of learning chords, DiSalvo says, he hit the streets. He played the guitar all summer, eight to 10 hours a day. He was the lead guitarist and lead singer in the bands he put together, and they played high school gigs. In six months, he had his first paying job.

While still in high school, DiSalvo took a woodworking class. “The teacher could tell I knew what I was doing, and left me alone. He was building a banjo for a friend, when I told him I’d like to build a guitar, which I produced in 1965. It wasn’t perfect, so I made three more and finally mastered my professional instrument, and never stopped. I even play a guitar I made in my show, and I’ve made over 120 of them.” DiSalvo also designs them.

After graduation DiSalvo attended college in Santa Cruz, then went on to the University of Chico where he majored in art. He received a bachelor’s in art and minored in music at San Jose State.

Teaching art in San Jose paid so poorly in the ’80s, DiSalvo said, that he had to find other jobs. But he always kept his band. He also worked as a rep for large music companies — Yamaha and Charvel/Jackson Guitars to name a few — selling their products to music stores.

In 1972, he opened the first music store in Santa Cruz, called Guitar Works. Then in the following years DiSalvo opened four more guitar stores at different times. He was also hired by a charter school to teach guitar, music and music history part-time while in Northern California. When the economy crashed in 2007, DiSalvo was forced to close his guitar stores, but continued teaching school for several years. “It was a struggle to make ends meet. “

DiSalvo, who had visited the Coachella Valley for years during vacations, noticed something prophetic: “There was a lot of music here, and none up north. I decided to move to the valley, ending up in La Quinta, and set about finding a job.”

While in Northern California, DiSalvo had performed a Frank Sinatra tribute with big bands on many occasions. When he arrived in the valley, he presented himself as a singer of Sinatra music, as well as the songs of other crooners.

“I found a myriad of groups that let me sit-in with them,” DiSalvo said. “On the fifth night a man approached me after I’d done a few songs and told me that Indian Wells Resort Hotel was looking for a singer like me. On the sixth day I met with the owners, and the eighth day I signed a three-year contract with the hotel, and within a month I signed a five-year contract.”

DiSalvo was given his own venue called Frank’s Place at the Indian Wells hotel. He appears 6 to 9 p.m. every Thursday, Friday and Saturday night from September through May. Dinner is optional during the show.

Also, if you love Italian food and love hearing the crooners of yesteryear, then you’ll want to pack a bag of groceries, hand over $25, and meet up at the ballroom at the Indian Wells Resort Hotel in November for an evening of Cooking with Frank.

DiSalvo will cook for guests while singing his trademark songs. Attendees will experience his gourmet Italian food, and leave with his cookbook. All proceeds and groceries from this event go to the Coachella Valley Rescue Mission, one of DiSalvo’s much loved charities.

Besides his fundraising for the mission, in February and March DiSalvo does a dinner show and silent auction to raise scholarship money for deserving kids. And as vice president of the Sons of Italy Dolly Sinatra Lodge in Palm Springs, he raises funds for the American Cancer Society, Pets on Parade, and many more charities.

Still, he appreciates music for music’s sake. “For the last 50 years I have played and sang with a band,” he said, “and I will continue with my music as long as it’s humanly possible.”