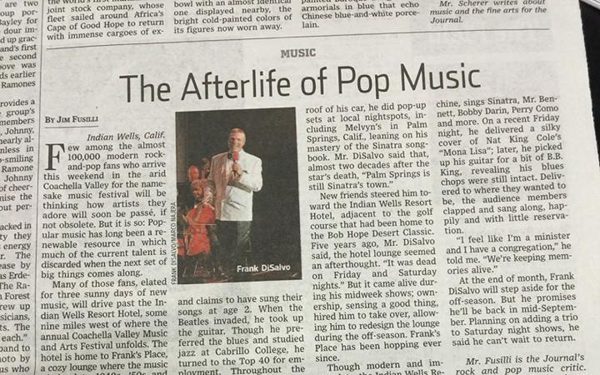 The Afterlife of Pop Music

Few among the almost 100,000 modern rock-and-pop fans who arrive this weekend in the arid Coachella Valley for the namesake music festival will be thinking how artists they adore will soon be passé, if not obsolete. But it is so: Popular music has long been a renewable resource in which much of the current talent is discarded when the next set of big things comes along. 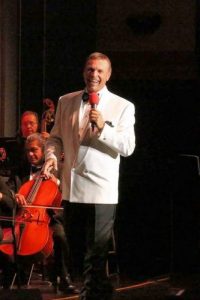 Many of those fans, elated for three sunny days of new music, will drive past the Indian Wells Resort Hotel, some nine miles west of where the annual Coachella Valley Music and Arts Festival unfolds. The hotel is home to Frank’s Place, a cozy lounge where the music of the late 1940s, ’50s and early ’60s is neither disposable nor bygone. Instead, it is a foundation of joy.

The titular “Frank” isn’t Sinatra, as you might expect, though he is a spectral presence. He is Frank DiSalvo, a singer, guitarist and go-getter who can make time flow in reverse. When he takes the stage here—four nights a week; on Sundays, he fronts a 16-piece big band—it is Las Vegas when the Rat Pack reigned.

“When you step into my room,” said Mr. DiSalvo when we met here last month, “you remember the good things you grew up with. You think: ‘I’m still valuable. I have worth.’”

Mr. DiSalvo, who is 66, was introduced by his mother to the music of Sinatra, Dean Martin and Tony Bennett in their San Jose, Calif., home, and claims to have sung their songs at age 2. When the Beatles invaded, he took up the guitar. Though he preferred the blues and studied jazz at Cabrillo College, he turned to the Top 40 for employment. Throughout the ’80s, his rock-and-pop cover band, the IRS—short for the Italian Rhythm Section—worked throughout the Bay Area. Another such band, Rainbo Sky, reveled in its versatility. “We had outfits: the ’50s, Country & Western. We had Hawaiian shirts. We could play Broadway tunes.”

Worn down under the grind of steady gigging while working day jobs, in 1990 he moved north to Redding, Calif., and opened a music store. But in 2000, he formed Swing City, a seven-piece jazz-and-pop combo that favored Sinatra tunes and was a local sensation—until the housing bubble burst in 2007. He kept trimming the band’s head count until it was a solo act.

When he headed south to the Coachella Valley in 2011, a vacuum cleaner tied to the roof of his car, he did pop-up sets at local nightspots, including Melvyn’s in Palm Springs, Calif., leaning on his mastery of the Sinatra songbook. Mr. DiSalvo said that, almost two decades after the star’s death, “Palm Springs is still Sinatra’s town.”

New friends steered him toward the Indian Wells Resort Hotel, adjacent to the golf course that had been home to the Bob Hope Desert Classic. Five years ago, Mr. DiSalvo said, the hotel lounge seemed an afterthought. “It was dead on Friday and Saturday nights.” But it came alive during his midweek shows; ownership, sensing a good thing, hired him to take over, allowing him to redesign the lounge during the off-season. Frank’s Place has been hopping ever since.

Though modern and immaculate, the Indian Wells Resort Hotel seems to exist in the mid-20th century. Its predecessor was opened in 1957 by Desi Arnaz and Lucille Ball. Framed photos of luminaries who played the golf course line the walls; there’s Hope and Bing Crosby and Dwight Eisenhower. Entertainers are well represented in the gallery: Sammy Davis Jr., Louis Prima and Dinah Shore among them. It’s safe to say that it’s highly unlikely their hit songs will be in the mix at Coachella 2016, even if the artists behind them were household names not very long ago.

With its 150-person capacity, Frank’s Place has a convivial atmosphere that encourages cheek-to-cheek dancing as the blue-eyed Mr. DiSalvo, supported on most nights only by a high-end karaoke machine, sings Sinatra, Mr. Bennett, Bobby Darin, Perry Como and more. On a recent Friday night, he delivered a silky cover of Nat King Cole’s “Mona Lisa”; later, he picked up his guitar for a bit of B.B. King, revealing his blues chops were still intact. Delivered to where they wanted to be, the audience members clapped and sang along, happily and with little reservation.

“I feel like I’m a minister and I have a congregation,” he told me. “We’re keeping memories alive.”

At the end of month, Frank DiSalvo will step aside for the off-season. But he promises he’ll be back in mid-September. Planning on adding a trio to Saturday night shows, he said he can’t wait to return.

Mr. Fusilli is the Journal’s rock and pop music critic. Email him at jfusilli@wsj.com and follow him on Twitter @wsjrock.